Fiona Kennedy awarded OBE for services to music and charity

Fiona Kennedy, singer, actress and broadcaster, has been appointed Officer of the Order of the British Empire (OBE) in the 2014 New Year Honours list for services to music and charity. Fiona received her OBE on Tuesday 1st July from The Queen at the Palace of Holyroodhouse, becoming Dr Fiona Kennedy Clark OBE, DL. Fiona was also appointed Deputy Lord Lieutenant of Aberdeenshire in 2013.

Fiona was joined at the Investiture ceremony by her husband, Francis Clark and children Hannah, Francis and actress, Sophie Kennedy Clark who recently starred in the Oscar-nominated film, Philomena.

Fiona said: “I am absolutely thrilled to receive this wonderful award – it is a huge honour and it was really brilliant to have all my family with me to celebrate in Edinburgh. This award is also for all the people I have been privileged to work with in music and charity, from whom I have learned a great deal.”

It also recognises her services to music which involves her position as former non-executive director on the board of the Royal Scottish National Orchestra, a position she held for six years. Fiona also mentors a number of young performers and devised and produced The Kist. The Kist is a musical celebration of our heritage through song and story and embraces all genres, from ancient tribal Gaelic, traditional folk, bluegrass, gospel, rock, pop to American country music. The Kist won 5 star reviews at the Edinburgh Festival Fringe and has also enjoyed success in Aberdeen, Glasgow and New York. Fiona aims to take The Kist on tour across Scotland and beyond next year. 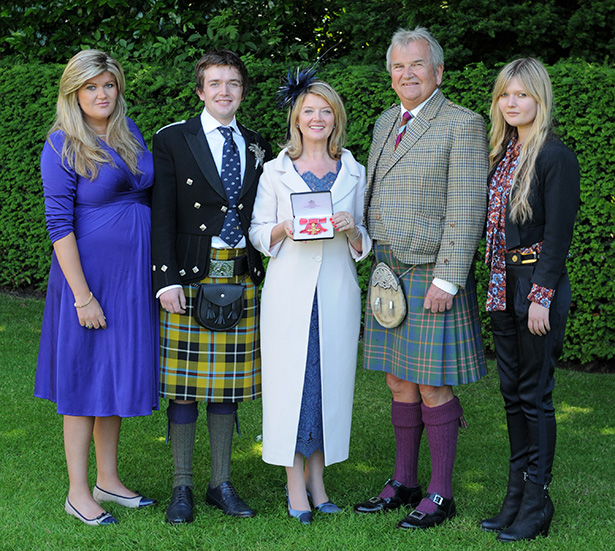